This is a two part piece on working with Interfaces in MVC via the Html.EditorFor helper.

The first part - “Display” - just covers one of those things I tried on the off chance, and was rather surprised that it worked right out of the box.

In the second part I’ll have a look at the next step of the process - binding these interfaces back to their models.

For a slightly messy user interface I’m working on, I wanted to be able to have a Model that holds a list of classes that implement an interface.

There is a possibility that all the classes might not be the same, and I was concerned that I was going to end up with a messy switch statement in my View that called the right Partial depending on which class I found in the list, and that this switch might need to be maintained on an on-going basis.

I was expecting either that, most likely, EditorFor wouldn’t like to be passed a List<> declared against an interface, or that it might complain that the concrete model type didn’t resolve to a single type in the list.

Instead, just outputting the List using a single EditorFor turned out to automatically select the right EditorTemplate for each item in the list with no further intervention.

This simple example shows a what happens:

In the controller we make a simple list of these models:

We need EditorTemplates for the models:

The main View is as minimal as can be:

Finally, when we put all this together we get the following in the browser: 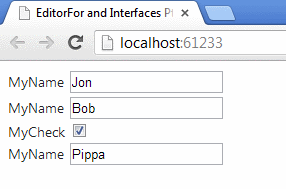 Here I’ve shown that it’s easy to use a combination of EditorFor and Interfaces to vary the output of a list to the page. Nothing earth-shattering in setting it up, but it is one of those things that’s nice to have working right out of the box.

In Part 2 I’ll have a look at the next step of the process - binding these interfaces back to their models.